Have you ever played a game in which your victory is hidden in another defeat?

If YES, then both of the participants have an equal score of wins and losses.

Definitely, the sum of the winner is equal to the loss of the loser.

Do you know the name of such a game? ZERO SUM game.

If you minus the total losses from the total gains in this game, the sum will be zero. Now, if YOU are a forex trader, you may be welcomed by the same zero-sum concept.

In this post, we will focus on the zero-sum concept of forex trading.

Being a forex trader, the question may arise in your mind: Is Forex a zero-sum game??

Yes, Forex is a zero-sum game. Because the profit of one trader is equal to the loss of another one. Money transferred from losers to winners. This, in turn, never changes the SUM of the market. When you deduct the total losses from the total gains, the sum will always be zero.

To know more about this zero-sum game. Just go through this interesting info: 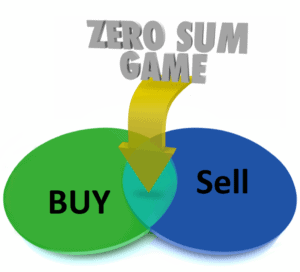 What Is A Zero-Sum Game

When we minus the total losses from the total profits of players, we will get the zero-sum.

The sum of each result will be equal to zero in this game.

Example: When enjoying a party of the Chicken piece. When eating a bigger piece, minimize the number of pieces for others. At the same time, fewer eaters prove to increase the quantity for more eaters. But the party presents a picture of a zero-sum game only if the chicken piece is divided equally among them.

Is Trading A Zero-Sum Game

Yes, trading is a zero-sum game if Profits and losses are calculated according to the market average. In this game loss of one participant proves the gain of another participant.

In such a game, a winner moves as far as the loser moves back. Someone’s failure becomes the reason for another’s success.

Is Forex A Zero-Sum Game

On the FX platform, some traders are the account savers while others are the gamblers of millions. Some traders become scalpers, whereas some are ready to hold positions every week.

Sometimes, one successful trader can compensate the other trader.

Forex is a zero-sum game. You act like an owner of the company after buying its shares. The reason behind this is that when you earn money, another person has to face loss.

The capacity of making gain/loss on the FX terminal is faster than stock. Participants play this game by offsetting each other.

Depending on the geometric psyche of the Fx market, everyone is trading with different objectives at different time zones.

Remember buying assets or currencies is not the business of forex traders. Their trade is to adventure against one another in the light of stock rates.

On the FX terminal, one trader is genuinely betting on another person’s trade.

Sometimes you buy a share, but when you realize its value is near to drop, you will never be late to sell it.

On the other hand, the buyer of this share expects the price is going up. Now there is no option of winning both participants. The result shows 1 winner/1 loser.

Actually, you become the owner of an asset after purchasing it. Now your asset has an integral value that pays extras.

However, the FX market doesn’t make you the owner of something. It is the game of betting against each other.

It is not necessary to bet on the dropping price while selling some asset. At this point, it is not important to go against each other. (for you and the buyer).

Forex is a type of cruel trading trend. Because a forex seller is betting on the falling price, in this way, you stand directly for that person who takes the rising price.

On the fx trading zone for scoring 1 point, the trader on the other side has to miss 1 point. So both traders score equal points of wins and losses.

In actuality, to win a zero-sum FX game, you have to find out how to defeat someone by using your wisdom. By scoring points, you have to beat someone with your performance.

Remember, to win a tough trading FX zero-sum game, the failure of every loser promotes every winner. Your outcomes balance the sum lost by losers. Being a zero-sum game, FX ground proves to be a battlefield.

If Forex Trading Is A Zero-Sum Game, Why Is It So Popular

Most expert FX traders said that leverage is the main cause of Fx trading popularity.

In fx trading, traders are sometimes allowed to try their luck more than 500 times. This time period is too much to secure their deposit.

Leverage kills your trading skills. Much leverage makes you closer to the decline.

Eventually, pretty leverage can sink the titanic of a forex trader. In short, the facility of leverage doesn’t allow you to make the right decisions.

In some situations, it brings you to the edge of a deep ravine.

What is an example of a zero-sum game?

Gambling is a famous example of a zero-sum game because the total winning points are equal to the total points of losers.

In tennis and poker, the game ends with one winner and one loser. So, tennis, poker, and chess are popular zero-sum games.

Except for risk, many things are similar in FX trading and gambling whenever you enter a trade to make more money.

You have both kinds of chances. Either you win, or you lose. In both cases, you are at risk. This risky situation makes Fx trading just like gambling.

No, forex is not a zero-sum game. In this trade, transactions, spread, and funds paid to brokers are extra expenses a trader has to spend. Out of thousands, only a few traders are making money consistently.

Most traders are making money for brokers. , they are the losers of the game. So, it is not a zero-sum game in the case of paying commissions and spreads.

After going through the informative post, it is clear that forex is a zero-sum game like poker, tennis, or chess.

It is not included in zero-sum games as if a variety of SHORTS and LONGS are available to trade forex. But it is not possible on the forex platform.

However, to trade forex, there is a lot of spread awaiting for you to pay in all.

For example, if you deal to buy 1 lot, next to you is a customer ready to spend 100$. This is quite the opposite of the zero-sum game.