When you’re about to enter a trade with a broker, you are likely to ask yourself,

Did I understand the underlying principles behind this trade? Did I have a good idea of its trading expectancy?

This post will discuss what “good trading expectancy” is, its relevance to traders, and how it should factor into your trading decisions.

Let’s come to the point by answering: What is a good trading expectancy?

A trader can have a trading strategy, but if they don’t have a good trading expectancy, all the strategies in the world won’t help. 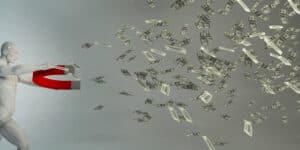 In trading, expectancy refers to the amount of money we hope to win or lose on average/ dollar you risk. Trading expectancy is a ratio that shows the profit for each trade conducted.

It depends on the following data:

What Is a Negative Trade Expectancy

Negative expectancy refers to the negative value that a trader can probably lose per each dollar somebody risks.

Example of A Negative Expectancy

Find the expectancy of a trader. Who wins 40% of the time. And generates $180 with the average on winning trades. He lost $480 on failing trades.

Result: The trading expectancy of the above trader is negative.

What Is A Positive Expectancy

The positive value of the assets in positive expectancy trading refers to how much money a trader can hope to profit per each dollar someone risks.

Example of a Positive Expectancy

Find the expectancy of another trader. Who wins 40% of the time. And generates $400 with the average on winning trades. He lost $100 on failing trades.

Result: The trading expectancy of the above trader is positive.

See also  Frustration in Forex Trading [How to Deal with Frustration]

How To Calculate Trading Expectancy

To figure out expectations, multiply the average return for each trade, both wins, and losses, by the following method:

300 transactions  Among 3oo trades. The ratio is

How To Apply The Formula Of Expectancy Ratio

The average winning transaction is $400, while the average losing trade is $100, for a total of four trades. We can now calculate the expectancy ratio by applying this formula:

What Is A Good Trading Expectancy:

A positive expectancy rate greater than 0.25 is regarded as a good trading expectancy. That explains if you put $100 at risk, you should expect to make a profit of $25 (0.25 X $100 = $25). In online trading, traders usually believe 0.25 R, in which R represents the risk in dollars, to be a reasonable trading expectancy.

What Do R Multiples Stands For

R multiples are a way of determining the first risk level for a trade-in in terms of risk or reward. For example, if you have a stop loss of 40 pips in the forex market and a risk of $5 pips, you will lose $200 if the scenario changes. The initial loss, commonly known as 1R risk, is $200. R s means risk in this sense.

Moreover, rather than using pips or dollars, we represent risk using R, such as 1R, 2R, and so on. If you take a trade with a profit of $50 and a loss of $25, you will profit twice as much as you risk, or 2R. However, if you lose $25, you will forfeit 1R. You can easily describe your trading as:  “I made 3R today and lost 1R yesterday.” “There’s a 4R chance in this trade.”

How To apply the expectancy formula In Trading

After learning about R multiples, let’s go on to the expectancy formula. The two major steps are as follow:

The formula for expectancy  is as follows:

Expectancy= Sum Of R / No. of Trades

Let’s look at an example. From the equation, if you made 20 trades in all and won 40R in whole.

Putting the values in the above formula:

Expectancy= Sum Of R / No. of Trades

Result: You get a two expectancy in this.

How To Improve Trading Expectancy

Using a money management strategy can help you improve your ability to create trading strategies. Expectancy and risk are two important aspects of money management. In forex trading, expectancy refers to the average predicted profit or loss on a trade. It’s a risk-to-reward ratio of type.

Learn Money Management To Get A Good Expectancy

If you want to trade and use money management, you must take a risk. Your profit would be dependent on the amount of risk you committed. The other big decision you should consider after learning expectancy ratios, as well as R multiples, involves position sizing.

That’s why many traders are satisfied with 10 to 15 % annual returns. while others want to make a fortune with only twenty to thirty thousand dollars.

Finally, you should trade according to your interests. and pick your trade position based on the level of risk you are ready to accept.

You can set these guidelines without factoring in your entry and exit points. You may need to check about the options given:

According to Van Tharp: “position sizing accounts for 90% of the volatility in an expert trader’s success. All these are twists along with the same topic, but the principles remain the same.”

The value of position size over the entry and exit positions is seen in the marble bag game. Where every marble taken from the bag represents a trade-in R multiple, such as winning 5R or losing 1R. Every game keeps actual cash, which can go up to $1200 at times.

How to define good trading efficiency?

Bad performance is defined as a factor of 1.0 or less. The average result for trades is in the category of 1.10-1.40, whereas great performance is in the zone of 1.41-2.0. The profit ratio of 2.1 or higher indicates that the trades are working incredibly well.

What is the value of the trade expectancy ratio?

The expectancy ratio is a formula that lets you calculate the future profits and losses of a particular transaction after taking for all of your previous trades plus their wins and losses. You’re constantly seeking positivity to convince you that the trade is rewarding in this case.

What exactly is an expectancy rating?

In general, the Expectancy Rating is a mix of a trading program’s Expectancy: how many you hope to obtain per dollar you risk every trade, and Chance, how frequently your approach competes.

The expectancy rate theory may be a little confusing. Yet it’s an important way to manage risk and position trades. You can do it by taking time and continuing with the 1R risk. You can always increase or decrease it as you gain experience.

Hoping! You have learned about the R multiples, calculation of expectation values, management of money at entry and exit times, and the concept of risk. By making small changes, you may design your money management strategy and develop a stable trading business. Good luck!