You will be surprised to know that many traders have intentions toward negative currency pairs, and amazingly, they are successful.

Are you going to start trading with them?

Before doing this, you have to know about such currency pairs in detail…

So, what are non-correlated forex pairs?

In short, when currencies work independently, they are known as non-correlated pairs. Examples of such pairs are USD/CHF, USD/JPY, and USD/CAD. The reduction of base currency or USD shows another currency that is a negative currency pair.

You should be aware and alert as currency pairs can change into inverse correlation over time. Economic and political factors are behind these changes.

So, it would be best if you can be updated with the changes occurring in the market. This is the only way you can become a successful trader.

In this post, we will discuss basic non-correlated forex pairs.

So, stay connected and start reading! 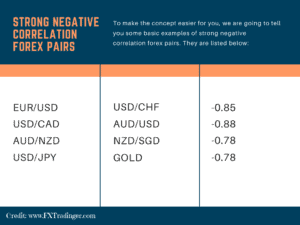 Before trading forex, it is essential to know about currency pairs. Currencies are the foundation of trading. So many beginner traders are recommended to trade easy setup currency pairs.

The correlation of forex currencies presents the relation between the reference of two different currencies. In correlation, the change of one currency determines the change in another currency.

There are two types of currency pairs:

Suppose both currencies move in the same direction; that is called Positive Currency Pairs. You can not trade with a single currency.

As you know, currency pairs are not independent. They are connected and interlinked to each other.

For example, if you select the two most traded currency pairs of the forex market, EUR/USD and GBP/USD are positively correlated to each other.

Here, the US dollar is the base, so any change in the US dollar’s strength directly reflects the currency pair as a whole.

There is the fact that the US dollar is the base currency, and it moves the other currency in the opposite direction. Such pairs move independently of each other.

What do you know about Non-correlated forex pairs? If you are properly trading forex, you must be aware of it.

Currencies are non-correlated when they move independently of each other. It shows that one currency has no effect or change on another currency pair. , they work independently.

It happens when the demands of currencies in each pair are different, and they have different economies.

For example, EUR/USD and GBP/USD have the same base currency: the US dollar. That’s why they move in the same direction. However, it may not always happen.

EUR/JPY and AUD/USD have no same currencies. So, they are non-correlated pairs and tend to be lower.

Now the question is, why USD?

It is because USD is the reverse currency.

Thus, if anything affects USD, it will have a large effect on all USD forex pairs crosses.

See also  How Many Trading Days In A Year[Right Figure]

To make the concept easier for you, we will tell you some basic examples of strong negative correlation forex pairs. They are listed below:

What is the easiest forex pair to trade?

EUR/USD may be the easiest pair you can select. But it is not as easy as you think. It may be the stable currency pair to trade.

Which pair correlates with gold?

What is negatively correlated to gold?

Generally, gold is negatively correlated with the dollar. The bias in gold should be the downside. It means the chart of gold goes below.

Here we sum up by saying that forex can be traded in correlated pairs and non-correlated currency pairs.

If you think it easy, you are wrong…

Before taking any decision, you have to get proper guidance and knowledge because ignorance brings disaster.

Hopefully, this post will help you go in the right direction and select the best negative currency pair.

Maybe in the future, we will bring more non-correlated currency pairs for you.